Reconstructive surgery is the mainstay of a plastic surgeon's work.

What is reconstructive surgery?


From the top of the head to the tip of the toe, and from newborn babies to the very elderly, reconstructive surgery is used to treat a wide range of conditions.

Reconstructive surgery is all about repairing people and restoring function. It is performed to repair and reshape bodily structures affected by birth defects, developmental abnormalities, trauma/injuries, infections, tumours and disease.

Using a wide range of reconstructive techniques, plastic surgeons mend holes and repair damage primarily through the transfer of tissue from one part of the body to another. Their main aim is to restore the body, or the function of a specific part of the body, to normal.

However, plastic surgeons carrying out reconstructive surgery also try to improve and restore appearance. Wherever possible they attempt to minimise the visual impact of the initial wound or defect, and the impact of the surgery itself.

Cosmetic surgery is an extension of reconstructive surgery in which the main functional gain to be expected is an improvement in appearance.

What problems and conditions are treated with reconstructive surgery?

Reconstructive surgery is used to treat a wide range of conditions which fall into the two following categories, congenital and acquired:

•  Cleft lip and palate
Using local flaps and grafts, surgeons can repair the incompletely fused area of the lip and palate.
•  Vascular anomalies, such as birthmarks
Surgical excision, combined with other treatment options, are available for the treatment of arteriovenous malformations (AVM) and certain haemangiomas.
•  Prominent ears, constricted ears and microtia
Reconstructive surgery is used to correct all manner of ear defects; techniques include otoplasty for prominent or constricted ears and ‘autogenous ear reconstruction’ for the treatment of microtia.
•  Hypospadias
Soft tissue reconstruction is used to correct this defect of the urethra in baby boys.
•  Craniofacial conditions
Reconstructive surgery is used to correct a wide range of cranial and facial deformations, such as craniosynostosis.
•  Hand deformities
Plastic surgeons can also correct birth defects of the hand – e.g. where a child has been born with too many or too few digits.

•  Cancer
Plastic surgeons spend a great deal of time operating on cancer patients. Reconstructive surgery, mainly excision, closure and flap reconstruction, is used to treat a range of cancer conditions, especially cancer of the skin, breast, head and neck and sarcoma.
•  Trauma
Reconstructive surgical techniques are crucial in the treatment of trauma and injury. These injuries most commonly involve the hand – in fact, 50% of the work carried out in many plastic surgery units is concerned with hand trauma. The treatment of open fractures of the lower limb is also common, as is surgery to repair soft tissue injuries of the face.
•  Infection
Reconstructive surgery is used to remove dead tissue following severe infections and to repair the surrounding area.
•  Burns
Plastic surgeons are the primary clinicians involved in the resuscitation, surgical treatment and reconstruction of patients who have suffered burns.
•  Hand surgery
Plastic surgeons are involved in the management of a wide range of conditions that affect the hand including nerve compression, paralysis, arthritis, ganglions and Dupuytren’s Contracture

What techniques are used?


Plastic surgery is a technical specialty with the aim of achieving repair. The word ‘plastic’, which comes from the Greek ‘plastikos’, meaning to mould or shape, indicates that repair is generally brought about by moving tissues. In the UK, the number of practising consultant plastic surgeons is increasing, as is the number of plastic surgery operations carried out each year. In this respect, plastic surgery is very much a ‘growth speciality’. It is also a discipline in which the scope and range of surgical expertise has improved dramatically in the last thirty years.

As a result of a recent surge in knowledge and skills within the speciality, the techniques used by plastic surgeons today are relatively new. Whereas plastic surgeons once dealt mainly in skin grafts, reconstructive surgery now consists of a range of powerful procedures involving the movement of large pieces of tissues around the body.

The revolution in plastic surgery techniques occurred in the last three decades of the twentieth Century, when surgeons applied a new understanding of the blood supply of tissues, or the vascular system, to enable the development of a large number of flap operations. Now, flap surgery and microsurgery have vastly improved plastic surgeons’ abilities to help restore function and form for severely injured or disfigured patients.

The main techniques used by plastic surgeons in reconstructive procedures are:

Skin grafts
A skin graft involves taking a healthy patch of skin from one area of the body, known as the donor site, and using it to cover another area where skin is missing or damaged. The piece of skin that is moved is entirely disconnected, and requires blood vessels to grow into it when placed in the ‘recipient site.

There are three basic types of skin graft. These are: Commonly used to treat burns or other injuries, using only the layers of skin closest to the surface
In a split thickness skin graft the surface layer of the skin (epidermis) is removed along with a portion of the deeper layer of the skin (dermis). Part of the dermis is left behind on the donor site and this enables the donor site to heal up in the same way as a graze Often used used to treat relatively small defects on the face or hand; all layers of skin from the donor site are used. In a full thickness skin graft the entire dermis and its overlying epidermis is removed. The donor site wound is closed with stitches.

3- Composite graft
Used to treat wounds have a complex shape or contour, such as following removal of a skin cancer from the nose; the graft comprises all layers of skin, fat and sometimes the underlying cartilage from the donor site.

Flap surgery
Flap reconstruction involves the transfer of a living piece of tissue from one part of the body to another, along with the blood vessel that keeps it alive. Unlike a skin graft, flaps carry their own blood supply, so can be used to repair more complex defects. Flap surgery can restore form and function to areas of the body that have lost skin, fat, muscle movement, and/or skeletal support. There are three main types of flap. These are:

1- Local flap
Uses a piece of skin and underlying tissue that lie near to the wound. The flap remains attached at one end so that it continues to be nourished by its original blood supply and is repositioned over the wounded area. 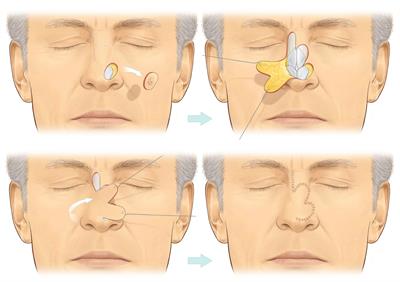 In this diagram case a skin cancer has been removed from the nose leaving a defect that cannot simply be stitched up.  A local flap, called a bilobed flap is used to close the defect. The flap consists of skin along with the underling soft tissue and its blood supply. A local flap like this relies on the fact that the skin has some natural elasticity and uses the lax skin in the bridge of the nose to close a defect near the tip of the nose where the skin is naturally tight.

2- Regional flap
-Uses a section of tissue that is attached by a specific blood vessel. When the flap is lifted, it needs only a very narrow attachment to the original site to receive its nourishing blood supply from the artery and vein. This pictures shows muscle from the calf being transferred, keeping its blood supply intact to cover an open fracture below the knee. 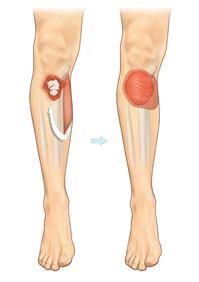 3- Free flap/microsurgery
Free flap reconstruction also involves the transfer of living tissue from one part of the body to another, along with the blood vessel that keeps it alive.

A free flap is a further modification of flap transfer where the flap is entirely disconnected from its original blood supply and then reconnected using microsurgery in the recipient site. 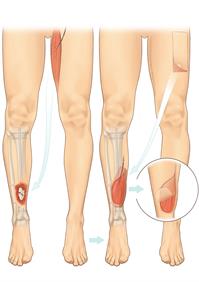 In this image, the patient has an open fracture of his right lower leg. A muscle is taken from his inner left thigh and transferred to his right leg. The blood vessels that keep this muscle alive are dissected out of his left thigh along with the flap, divided, and then joined up microsurgically to blood vessels in his right leg. This keeps the flap alive in its new position. To complete the reconstruction a split skin graft is taken from the left thigh and laid over the free muscle flap. This is called a free gracilis muscle flap

This procedure involves hooking up the tiny blood vessels of the flap with those in the new site, and is carried out with use of a microscope, hence the name microsurgery.

The ability to disconnect and reattach tissue in this way means that the reach of flap is no longer confined by a patient’s anatomy.

More than any other technique, microsurgery has revolutionised plastic surgery as a specialty, and is now the definitive treatment option for patients with cancer and major trauma. 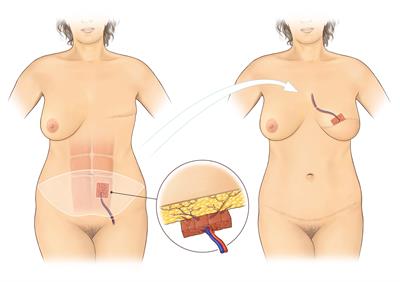 In this example of a free flap a portion of skin and fat of the patient’s lower abdomen is transferred to the chest to reconstruct a breast. The blood vessels that keep this tissue alive are divided as they emerge from the groin area and rejoined microsurgically to blood vessels in the chest in order to restore the blood supply to the flap. This is called a free TRAM flap breast reconstruction
Go to top
Patient Information Reconstructive Surgery Cosmetic Surgery Procedure Guides Patient advice and guidelines Useful Links
×